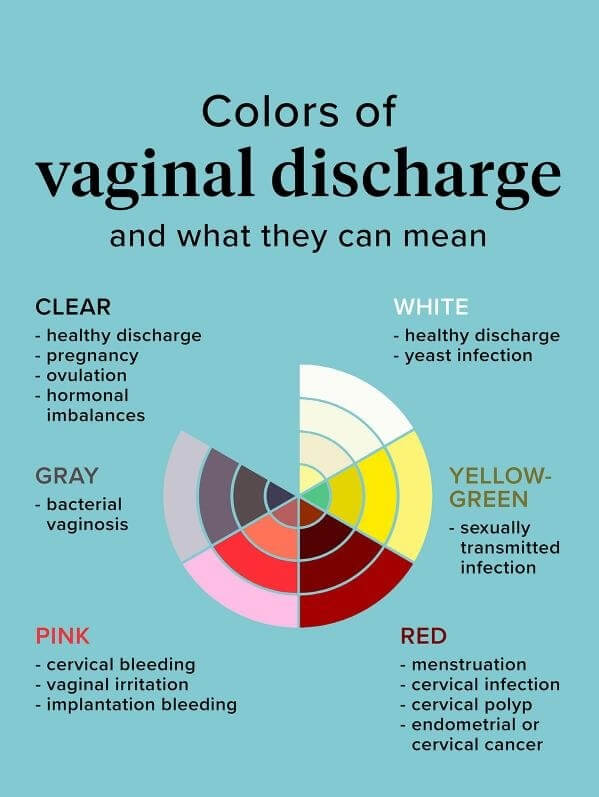 Vaginal discharge changes during pregnancy, changing color, texture and volume. One of the first indicators of pregnancy is an increase in vaginal discharge. Some color changes are normal, while others may suggest an infection or some other problem.

One of the most visible alterations that can occur in colour. The discharge can take the following forms:

This article explains what the different colours of vaginal discharge mean and when to contact a doctor about it during pregnancy.

What is a normal discharge?

Discharge is common during different times of the menstrual cycle and pregnancy.

Healthy vaginal discharge, also known as leukorrhea, is thin, clear, or white, and has a moderate odour.

To reduce the risk of vaginal and uterine infections, the volume of discharge increases throughout pregnancy.

In the later stages of pregnancy, the discharge is the thickest and may contain pink mucus.

The mucus is usually sticky and gelatinous in consistency, indicating that the body is preparing to give birth.

Discharge Colors and What Is Their Meaning

Vaginal discharge can take on different shades, which can signal a variety of health problems. Here are some of them:

It is typical for the volume of light-smelling vaginal discharge to increase during pregnancy, but unexpected colours and odours can signal an infection.

Antibiotics or other treatments may be prescribed by a doctor to treat infections in this area of the body.

During pregnancy, women can generally maintain their vaginal health by doing the following:

When to See a Doctor

Any unusual discharge should be discussed with a doctor since it could indicate an illness that has to be treated or a problem with the pregnancy. Infections might lead to consequences if they are not treated.

Although increased discharge is common during pregnancy, unexpected discharge associated with strong odours or discomfort in the vaginal or abdominal area usually suggests a health problem. The same is true for green, yellow or grey discharges.

If the spotting or bleeding is heavy, lasts more than a day, or is accompanied by pain or cramping, women should seek medical attention immediately.